A.J. Eaton was the son of Colorado’s 4th governor, Benjamin Harrison Eaton.  A.J. wed Minnie Lee Gooden on January 1, 1885. The Greeley Tribune hailed the marriage: “The Governor’s son has shown himself worthy of his surroundings and may the star of prosperity ever shine above his door.” 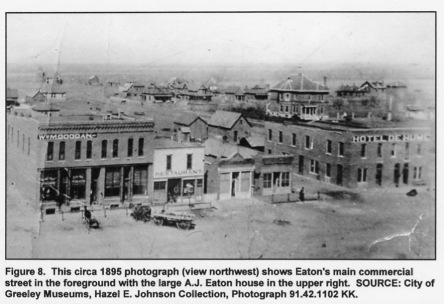 Minnie Gooden was born near Decatur, Illinois, the daughter of John A and Mary Elizabeth (Logan) Gooden. Her family moved to Eaton in 1883, and her father was a pioneer school teacher in the community.  Minnie, described as a “lovely Eaton belle,” was one of the first brides in the community. Benjamin Eaton gave the newlyweds an entire block of the Eaton Townsite (Block 23) as a wedding gift. The Eatons lived in the house in which they were married, described by local historian Pauline Allison Smillie as “their first home” in Eaton, while their new house on Elm Street was being built.

The wedding gift from his father and A.J. ‘s success in business led to the construction of a fine house in the southwest corner of Block 23 in Eaton. The two-story red brick house at the northeast corner of Second and Elm streets was built in 1887-88. In October,1887 The Greeley Tribune reported, “The brick masons who are at work on AJ. Eaton’s new house, have got a little above the surface with the wall. The foundation reveals the fact that it will be, when finished, a fine house.” The roof was being completed in January of the following year. By the end of February, 1888 the paper recorded, “A.J. Eaton has put up a large and handsome two-story brick dwelling, which is being lathed and will soon be ready for the plasterers.” Work continued on the residence into July, when Eaton had five carpenters employed finishing the construction. In October the tower for the “water works was being built.” The Tribune noted, “A wind mill will be placed thereon, which will furnish sufficient water for his house, barn, and lawns ….”

The two-story brick house with stone foundation featured a basement, a loft (attic), a full-width front porch, a two-story bay window on the south, and a rear porch. Based on the architectural drawings (which are on display at the museum), the first story contained the entry hall, parlor, sitting room, dining room, kitchen–with a sink, and pantry–with a pastry table, storage shelves, and a “refrigerator.” The second story included a bedroom, a store room, a bathroom with a tub, sink, and watar closet and three additional “chambers.” Located in the basement were the laundry (with two large laundry tubs), a fruit cellar, three cellar spaces, the furnace room, and two coal storage areas. The cesspool for the house, which was eight feet in diameter and sixteen feet deep, was situated in the rear, a short distance to the southeast. The 1895 Sanborn fire insurance map shows the house, which is labeled “A.J.Eaton’s.” Original drawings (on display at the museum) exist for the house, but do not indicate the name of the architect, contractor, or date. Benjamin Eaton operated brickyards in Eaton and probably supplied the brick used in the construction of his son’s house.

As the first two-story brick residence In town, the property Immediately became a local landmark, with some referring to it as the Eaton “mansion.” J.E. Snook recalled when he arrived in 1892, “Of dwelling houses there were but few. A.J. Eaton’s residence loomed high above the block of tiny frui

t and shade trees surrounding it.” A.J. Eaton was one of the first residents of the town to landscape his grounds. In 1895, he planted trees and shrubs in his yard and a number of shade trees along Elm and 1st streets. Local historian Pauline Allison Smillie noted that “the orchard in his yard covered almost an entire block” and yielded an abundant harvest of fruit in 1896.”  In 1902, the Eaton Herald wrote,  “Mr. Eaton has the handsomest home in the town. His large brick residence occupies a whole block. The grounds are filled with every kind of tree, shrub or flower that will grow in this climate. The grounds are Mr. Eaton’s pride and delight. Here he spends all the time he can spare from his business cares, experiments with new trees and flowers. His children are the envy of all youngsters in town. Think of what delightful nooks and corners there are in this whole block of play ground.”

The house and has been remodeled several times since 1888. The Pat Maylotts did much of the remodeling in the mid-1960s, and is what visitors will see when they tour the museum today. The house was transformed after the Maylotts had visited Europe and apparently became enchanted with the architecture. They commissioned Ross Bartley, a local man, to transform the interior in the “French traditions,” which changed the interior design of the A. J.Eaton era.